May was just as busy as I thought it would be... We had two major events (a white tie event at the university and the high school prom) as well as the start of the wedding season these past few weeks, so the entire staff has been working superhard. I've worked 12-16 hours a day, 7 days a week, and my boyfriend has come to the shop after his regular work to help me out. It has been loads of fun, I've met so many wonderful people and it's been deeply satisfying to see both the gentlemen and the ladies in their attires after we've fitted the garments! While I've enjoyed it, and look forward to next year's crazy May, I'm also a wee bit grateful we're moving into normal summer - meaning loads to do, but hopefully I'll be free from work one day each week, and I'll just need to work late evening once or twice a week.

All right, eunough about work! I started drafting this post in January/February, but never came around to publish it. So here's a little story of how I fitted my new dress-dummy!

A few years ago I got a dress dummy my grandmother had found discarded. It's been a huge help over the years regarding hemming and for storing delicate projects over night. But I never got around to making it a proper body double, as the back at it's smallest was still too wide and too long. This of course also made it a bit inaccurate when I measured hemlines.

Apparently I'm a very, very lucky girl, for my mother decided she didn't need her old dressdummy and gave it to me! It's a size or two smaller than the red one, meaning the back can be made to fit. Here's how I went about to shape it! 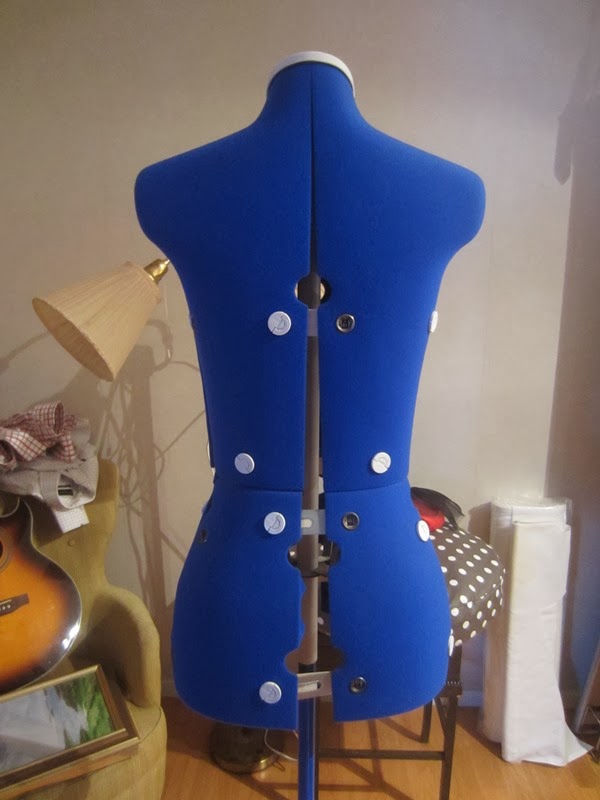 First I set it to a measurment close to my own (a bit smaller), making sure that none of the other measurments got distorted along the way. 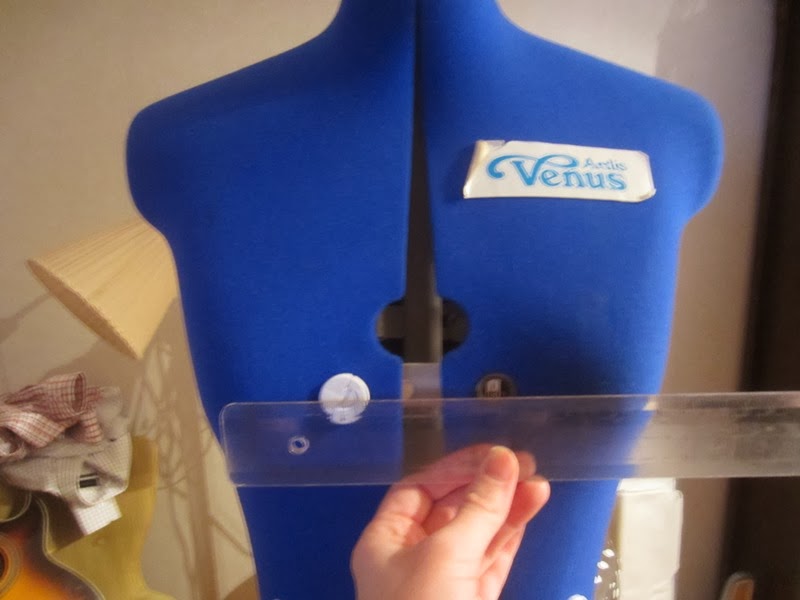 One important part was getting a correct distance between the bust apex'es (tricky to pad out later). 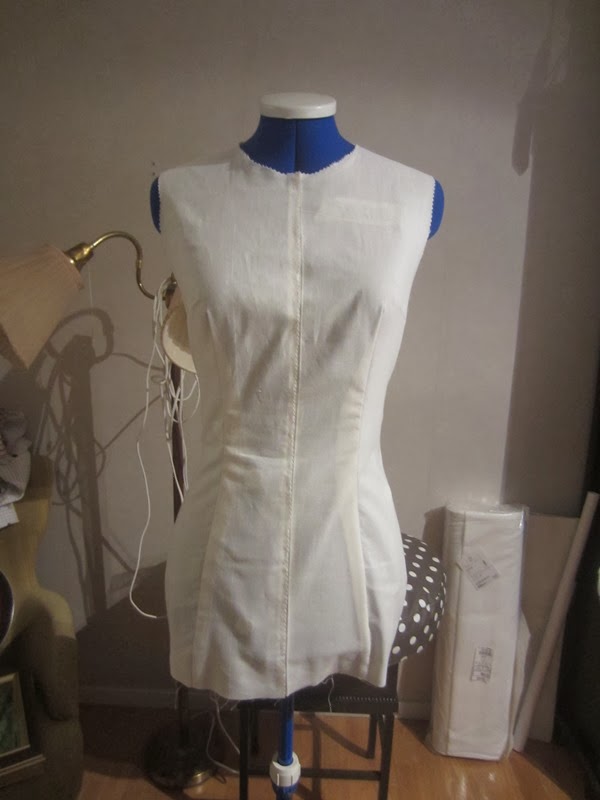 Second, I draped a close fitting sheath for the dummy, so I'd have something to sew the filling to. Also kept the lines of filling smooth over the "gapes".

Third, I made a skin tight sheath for myself, using my block patterns and reducing the wearing ease from them. Some say it's better to have the dummy with the ease included, but I think that depends on what I want to make. For jersey and bias cut I think it's easier to see how it will really fit on my measurments, not my measurments plus ease. And wovens are easier to get on and off the dummy when it's in my size =)

After finalizing the sheath in toile fabric, I cut it out in a home decor brocade that's unlikely to stretch over time and that can also withstand pins. 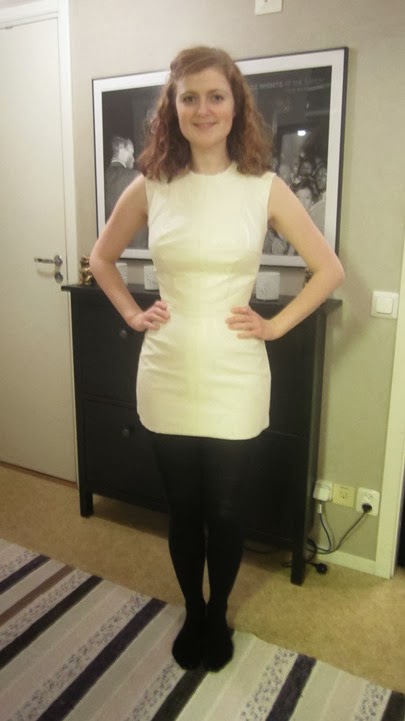 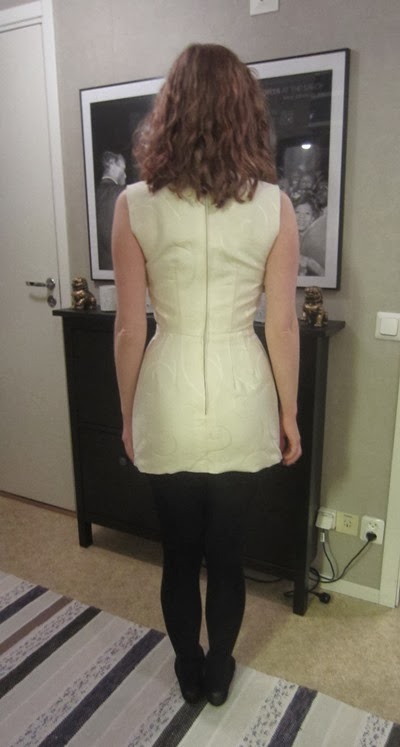 Pretty tight, huh? Let me tell you, there was no way to sit down in this thing =)

Fourth, stuffing the dummy! Gee, it was a lot to stuff! One gets a whole other take on body proportions when skulpting them out on a dress form... For the bust I used an old bra, carefully measuring as I went along to make sure the bust measurment equaled mine. 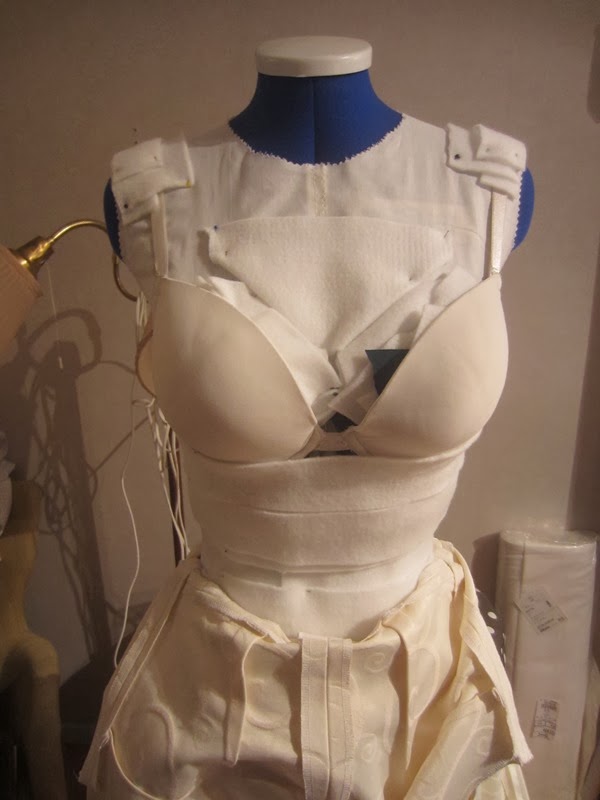 I had really planned to sew all the filling to the bottom canvas sheath, but I was so tired of this project and just wanted to SEW something that I left it, promising myself that I will fix it. Later. Hmm, perhaps I need to set a date for that? Before fall? Yes, that sounds like a plan =) I also need to add more padding, it's a bit too small right now. As you can see below, the sheath is much looser on the dummy than it is in the pics of me above. 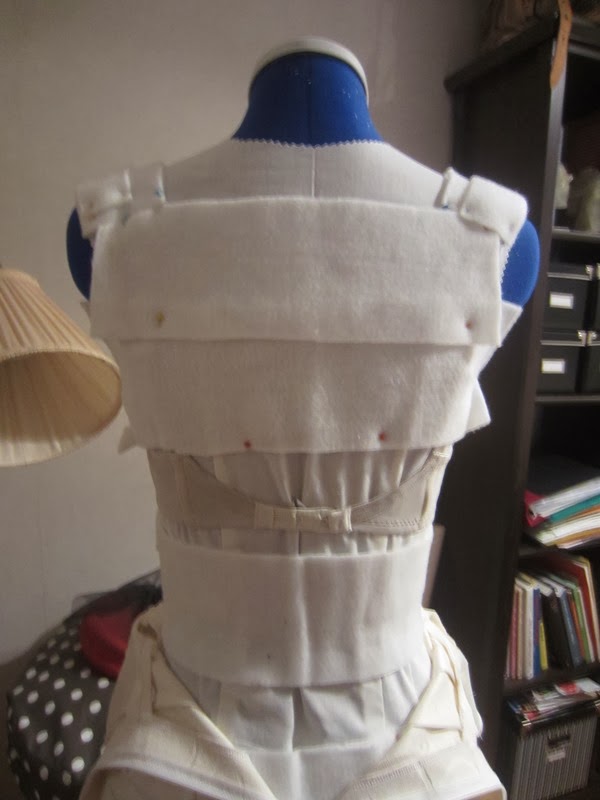 The outer sheath closes with a zipper down the back, making it easy to go in and adjust the filling if it starts to slide around. Also, both sheath and filling is fairly easy to adjust should I gain or lose a couple of pounds. 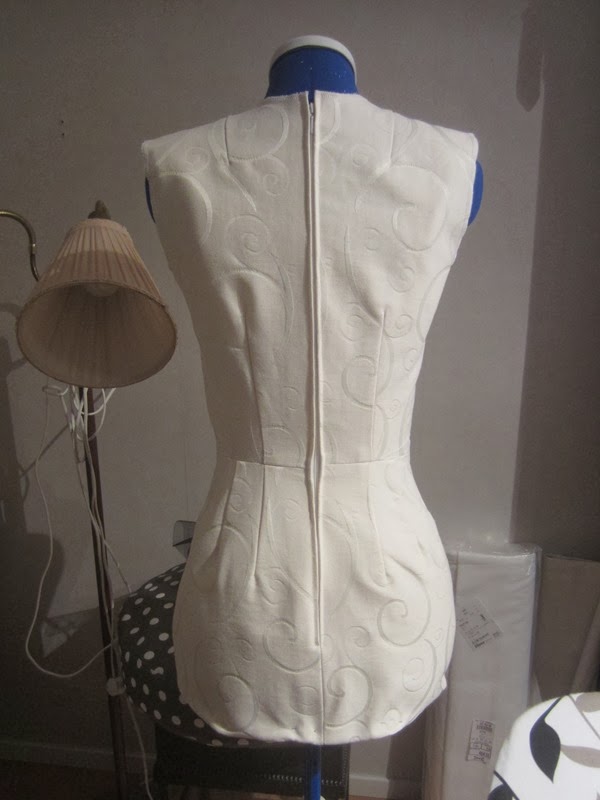 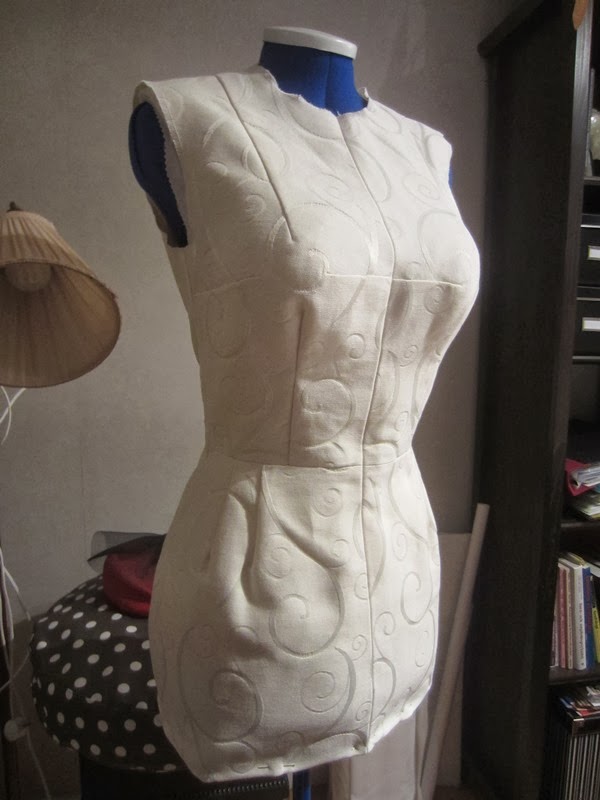 There we go! A dress dummy that can actually function as a fitting aid, help me measure hems (I took the hem-guide from the red dummy, this one's has been lost over time) and that doesn't look too bad on it's own.

This is so helpful! I have been wanting to do something like this for quite some time. I knew that I wanted to make a zippered cover from my sloper (that is, unfortunately, too big now) but didn't know how I wanted to approach the padding. I have been stuffing a bra and wrapping polar fleece around my dress form. Thank you for sharing!

Erika
Welcome to my blog! This is where I keep an erratic track of the good things in life; there’s lot’s of sewing, swing dancing, some thifting and baking. I started swing dancing 2006, and in my attempts to dress suitable to the lindy hop period (30s/40s) I also fell for the vintage dressing style. Now I’m bit by bit sewing a wardrobe, both for everyday and for dancing. Some garments are pure re-creation of bygone times, others are more vintageinspired. I’m learning and developing as I go, and it’s a wonderful journey. I hope you’ll enjoy reading about it too!

Sewing and other crafts

Feel free to borrow my photos for non-commercial use, and I'd be grateful if you link back to me. I'd be even happier with a mail or a comment on where you've used it, but it's not a must =) Thank you so much!